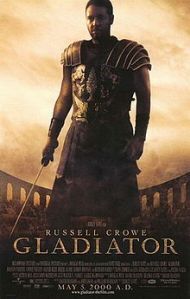 When I first started writing, I always had a difficult time determining how I wanted my main character to appear in each and every scene. Though your protagonist will always be an extension of yourself, we feature a wide variety of selves –

For instance, you may be a fearless rock climber who grits his teeth and laughs at the face of physical danger, but the thought of saying hello to a girl you like makes your throat dry and your feet heavy. Or maybe you consider drag racing an exhilarating experience, but every time you try to parallel park you wind up freaking the f’ out then cursing the owner of that parked BMW you just hit three times.

Point is, no person is static – we change from situation to situation, person to person, and place to place. You are not cardboard, and neither are good protagonists.

But don’t we all love the bad-asses?

When you think back to your favorite moments in films and books, surely you think of the climax when your character does something ball-sy to save the day. But I’ll tell you something you may not have noticed – the reason your favorite characters impact you emotionally during the climax of a story is because you related to them in the beginning of it.

Every good story features a character arc. That’s the change in character your protagonists undergoes throughout the course of the story, and it should move hand-in-hand with the progress they make toward their external goal. The reason we all love that montage in Rocky so much is because in the beginning of the film he strikes a chord with our own lives – washed up, unloved, thrown out and spit up by society.

But when Rocky gets a second chance – when he trains for that boxing match, when he lifts his arms high after racing up those stairs – we see ourselves, and his sense of accomplishment becomes our own.

Once we see ourselves in the shoes of a main character, we become emotionally invested in their journey. That’s why we all love happy endings and stories in general – they fill us with hope for our own lives.

Before you can craft an emotionally-charged climax where your protagonist completes their transformation and fills your readers with hope, you must make your character someone your readers can empathize with from the start. This does not mean that your main character must be generalized, ordinary or even likable. It means that the reader must be able to empathize with them.

In “A New Kingdom,” James starts out as a passive aggressive teenager with a dead-beat dad, no social life, and the fashion sense of a homeless person. Throughout the course of the story, however, he becomes the leader of a rebellion and humanities greatest chance at being free once more.

Here’s an excerpt from the beginning. See if you can relate:

In a classroom packed with like-minded adolescents, who dressed with the same flashy t-shirts and flat converse shoes, sat an oddball who wore a faded grey t-shirt along with dirty, knee-high shorts.

His name was James O’keefe. His face looked like it had been sculpted by Michelangelo, but his figure was tall, lanky, and altogether bony. Yet with even the most marvelous of faces, a wardrobe better suited for a homeless person made it difficult for him to achieve even a half-decent social ranking. After all, a gold coin covered in feces rarely gets picked up.
James exhaled through his nostrils and looked to see the fat red “F” marked at the top. He was hoping for a C or at least a D, but once again he’d flunked a test he’d wasted hours studying for.

Chris Hackle, the kid with the overgrown fo-hawk, turned to his buddy and whispered something. James caught a glimpse of his quiz – It boasted a sweet-looking “A”.

While James tried to convince himself not to get bitter, Hackle started working on his own project. He wrote something down on a piece of paper, something which made his buddies laugh. Hackle’s buddy, who wore a tie over his a normal T-shirt, dug a plastic cup out from his backpack. The two of them laughed then passed the paper and cup along with the scribbled note.

Whatever they were up to, it had something to do with James – he was sure of it. One by one, each student would read the paper, hide a laugh, then look over at him.

The poorly dressed teen tried to ignore it. He desperately hoped that the bell would just ring. He sensed the dampness under his armpits, and so he crossed his arms to hide any sweat-marks. Class had to be over soon. More than anything else, all he wanted to do was read that stupid piece of paper, but every school kid knows not to show a kid something that they really, really wanted to see.

The bell rang. James got out from his chair, picked up his oversized back-pack, and jetted to the door. He was already outside of class when Hackle grabbed him by the back of his shirt and stopped him.

“Donation!” Hackle pushed the paper into James’ chest and put a cup full of crunchy dollar bills and change in his hand. James read the paper.

Fund for the Homeless

As you can clearly see by his terrible wardrobe, James is a hobo (and a bitch) and his dad is too drunk to notice. Please make a small donation to help this sorry student (bitch) out.

I want to talk about The Maze Runner today, a novel written by James Dashner and adapted into a screenplay. I saw the movie with a beautiful girl this week and I really enjoyed it. I wanted to point out some of the reasons it was such an effective story.

The movie begins with Thomas rising in an elevator shaft. He reaches the top, and the hatch doors flip open to reveal twenty or so teenage boys staring down at him. He has no memory of his past, and does not even recall his own name. He tries to run, only to discover the young men are surrounded by giant walls that close and open by their own power. When he stops at an open section of wall, thinking about running into the spooky woods, one of the boys violently shoves him to the ground, then assures Thomas that he was lucky for the knockdown.

This is an outstanding opening. Let’s discuss why:

1. Who is this young man? I’ll tell you who. He’s any and every person. Thomas does not recall his past, let alone his own name. Creating a protagonist with general characteristics is a great way to give the readers someone they can relate to (think Harry Potter).  Still, crafting a protagonist who can stand out in any crowd will create someone more memorable, as long as your readers can identify with them on some level (think Girl With the Dragon Tattoo, Lenny and George from Of Mice and Men)

2. Instant conflict – The elevator Thomas rises on travels at an incredible rate of speed. It looks as though he is headed for a collision at the rooftop. Instead, the doors open to find a group of boys staring down at him. But these boys don’t readily accept him as a friend – they look like a group of punks who want to start trouble with the new kid. Thomas tries to flee, only to find he is trapped by the giant walls surrounding the area, and will be forced to live with them.

3. Suspense – So many great questions are raised in this opening. Who is this protagonist, and why was he sent here? And where is ‘here’ – what is this new world? And the moving walls – we already know he is in a maze (the title kind of gives it away), but what is behind those walls? After Thomas is violently shoved just short of entering the maze, he is told he should be grateful. The viewer is left to wonder what could possibly be behind those walls that’s worse than a violent, forceful knock to the ground. It isn’t until later we learn about the mechanical creatures lurking behind them, and by the time we do we are already expecting them to terrify us.

We want to know the answers to these questions, and more specifically, the answer to this one – Will Thomas find a way out of the maze? (that’s the plot)

Anyway, I strongly suggest you go check out this movie. And bring along a beautiful date if you can, it will only make it more enjoyable.

– Author of A New Kingdom